Home
News
Uganda: 20% decline in economic output without climate action
Posted on April 8, 2020May 22, 2020by Santin SelvaggiaPosted in News
0

Less nutrition, less productivity, less development: the changing climate hinders poor rural areas of developing countries. A new study with contribution from the RFF-CMCC European Institute on Economics and the Environment (EIEE) and the  CMCC Foundation shows the impacts of climate change on the labor supply in the 21st century, and how decision-makers should act today to prevent the potential negative outcomes. 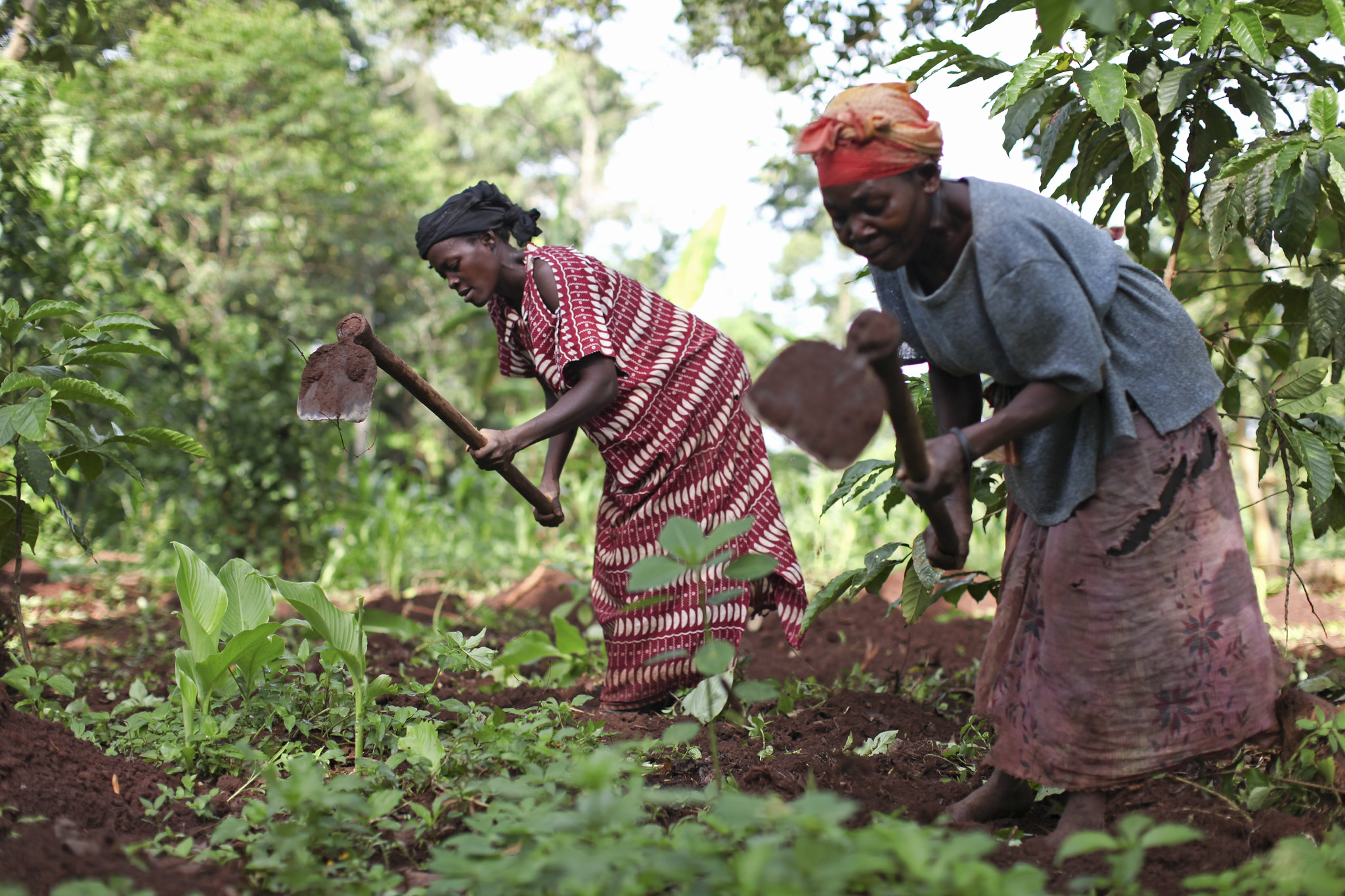 Jane Sebbi, left, is a farmer with 12 acres of land in Kamuli, Uganda and a mother of seven children. In this photo she works in her field with her sister-in-law. Jane grows corn, bananas, coffee, amarinth, potatoes, soy beans, common beans and sweet potatoes. She also takes care of pigs, goats and chickens. Photo by Laura Elizabeth Pohl

There is evidence that climate change affects both the quantity and quality of food production, reducing food security, and nutrition intake. In developing countries, where the agricultural sector dominates the economy, the impacts of the changing climate on the agricultural supply chain will substantially hinder economic growth and well-being of the local communities.

A recent study co-authored by researchers of the EIEE and CMCC Foundation – Euro-Mediterranean Center on Climate Change analyses the case of Uganda, a Sub-Saharan African country already struggling with malnutrition and susceptible to the effects of climate change, with about 80 per cent of the population depending on rain-fed agriculture for their livelihood. The analysis sheds light on an important but understudied linkage between climate change and labor supply through food consumption.

Using longitudinal micro survey data from Uganda combined with high-resolution climatic data, the study aims to fill the gap in the existing literature by empirically investigating both the direct effect of climatic shocks on labor supply (defined as the number of hours worked per week for a person) and the indirect effect through variation in dietary intakes due to a warmer environment.

“For the first time, we have provided empirical evidence linking climate change, nutrition and labor supply”, explains Shouro Dasgupta researcher at CMCC and EIEE. “We know that climate change will have an impact on nutrition and that nutrition plays a key role in improving labor productivity and boosting economic growth in regions where the labor force consists mainly of low-skilled and undernourished individuals. Our study shows that, as temperature increases, initially labor supply does increase; in a mild environment, people can work more hours per week. But beyond a weekly temperature threshold of 21.3°C, the number of hours per worker declines due to heat stress”. Food intake requirement is lower in the intermediate ranges of temperature, as supported by the medical literature, due to lower energy requirements, while both low as well as high temperatures lead to higher calorie intake. The temperature has a non-linear (instead, a U-shaped) relationship with calories intake.

“At both extreme ranges of temperature (very cold temperatures and very hot temperatures), the human body needs more energy, and thus more food, to regulate its temperature”, explains Dasgupta. “Thanks to our study, there is now empirical evidence available for the first time of this energy balance equation, as we observed the real weekly calories intake of households in relation to the weekly temperature”. This shows that a warmer climate can also have an indirect effect on nutrition by increasing the need for calories intake.

In addition, results suggest that a 10 per cent increase in calories consumption leads to an increase in labor supply of almost one hour per week. “The repeated household surveys allowed us to separate two effects of weather/climate on household economic outcomes: that of short-term weather on hours worked and the last year’s climate on agricultural output and hence food supply. The results suggest that increased global warming can have a significant detrimental impact on both labor supply and food security” affirms Johannes Emmerling, head of the Integrated Assessment Modeling Unit at EIEE and senior researcher at CMCC Foundation. “We were able to model the economic behavior of the Ugandan households and show how the drop in labor productivity due to rising temperatures will be amplified by an increase in demand for food consumption” explains Soheil Shayegh, researcher at EIEE and CMCC Foundation. Researchers used these empirical results to parametrize an Overlapping Generations Model to estimate the long-term impacts of future climate change – if unmitigated – are projected on food consumption, human capital development, and social welfare. Results show that in Uganda, low-skilled labor will increase due to the increasing demand for agricultural products by the end of the century.

An increase in a number of low-skilled laborers, coupled with climate change impacts on sectoral productivity and labor supply, leads to a significant drop in total economic output and reduces output per adult by 20 per cent in the last part of the century under severe climate change projections.

For more information, the article: